When traveling India one thing particularly stands out: the number of people in this country. I can’t say for all travellers but I know for sure that what I’ll remember of India particularly are its crowds and its crowdedness¹.

It will most likely never happen that an Indian tourist sets foot on the Netherlands, decides to pay a visit to the local church, and barely 2 minutes later finds himself surrounded by more than a 100 outrageous Dutchies armed with cellphones to take photos and shake hands with the curious visitor. Though, this was exactly what happened to Cedric and me.

When we acidentally passed a local Hindu temple while looking for an auto rikshaw (taxi) in a random neigbourhood in Ahmedabad, the temple’s priest immeditately asked us in. We politely turned down the offer, but a proper Indian doesn’t take a ‘no’ of course and insists until you give in and perform your duty of the curious visitor.

In this case we were asked to participate in the evening prayer ceremony. Whilst a mechanical drum-an-bells machine hit a deafening upbeat rhyhthm, Cedric and I took turns in moving the girandole in circles in front of the Hanuman statue to “offer it light”.

When the machine returned to silence we notice that we coouldn’t get out of the temple anymore since a huge crowd of people had gathered on the stairs and were now all shouting excited, trying to take photos of us and holding crying babies up in the air for us to see.

The priest sat us down on a pillow and started to perform a ritual where he blessed us with a tikka, a dot of red sandalwood paste on the forehead, and a mauli, a red cotton string tied around the wrist by the priest. 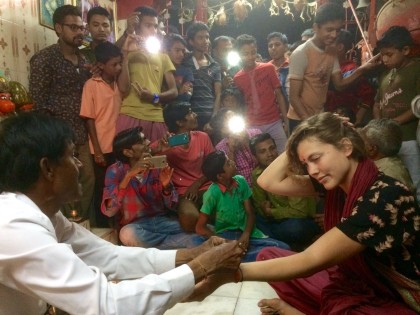 The priest also invited us in his home for dinner but we had already dinner arrangments with another friend that night so we politely refused. When it was time to go, the priest efficiently escorted us through the crowds whilst pushing people relentlessly out of the way and preventing the kids from grabbing on to the auto rikshaw.

As we left the scene and were ran and shout after by a troop of outrageous kids. Completely overwhelmed we tried to catch our breath again and made the promise we will never become a celebrity, ever. 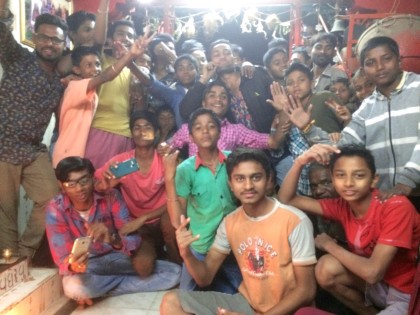